After years of wrangling and setbacks, Massachusetts voters appear poised to finally get the chance to decide whether the state’s highest earners should pay more in taxes. 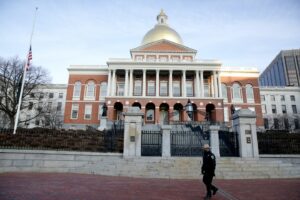 The Legislature next week will take the final procedural step to put that question on the 2022 ballot, kicking off what could be a long, expensive fight over the wisdom of raising taxes on wealthy residents.

House and Senate leaders said lawmakers will gather Wednesday in a joint session, when they’re widely expected to advance a proposed constitutional amendment that would impose a 4 percent surtax on personal income above $1 million. Proponents say the change could generate roughly $2 billion in new annual revenue for education and transportation.

If approved, as expected, the proposal, dubbed the millionaires’ tax, would then move to the November 2022 ballot, and effectively jump-start what could be a 17-month campaign with unions and progressive advocates on one side and business leaders on the other.

“As Massachusetts recovers from the COVID-19 pandemic, and as we prepare for our future, we have a unique opportunity to move towards a Commonwealth that truly works for all residents,” said House Speaker Ronald Mariano and Senate President Karen E. Spilka in a joint statement announcing next week’s vote.

Mariano, a Quincy Democrat who has opposed the measure in the past, and Spilka, an Ashland Democrat, have both said they support advancing the proposal, which proponents have dubbed the Fair Share Amendment.

“We stand with the residents of Massachusetts in exploring new ways to increase revenue for the state as we envision and invest in an equitable and hopeful future for the Commonwealth,” the Democratic leaders said.

The Legislature approved the proposal, 147 to 48, in 2019 and must advance it in consecutive legislative sessions before it can make the ballot. The measure would effectively create a 9 percent income tax rate on personal income above $1 million, compared to the flat tax of 5 percent currently imposed.

It had been headed to voters in 2018 before the Supreme Judicial Court rejected the ballot question as unconstitutional. But it’s likely to avoid another similar challenge, thanks to a legal twist: Instead of filing it as a citizens-initiated petition, as it was three years ago, this time it began in the Legislature, easing its constitutional path.

Battle lines have long been drawn around the proposal. Democratic lawmakers, labor unions, and other advocacy groups have said that the state will need more revenue to help address inequities heightened by the COVID-19 pandemic.

Supporters on Thursday quickly cheered the planned vote. A group known as the Raise Up Massachusetts coalition said it intends to hold a dozen rallies in the coming weeks to launch a campaign ahead of the November 2022 vote, foreshadowing a lengthy effort to convince voters.

“Long before the pandemic, Massachusetts needed new investments in our transportation and public education systems,” the group said in a statement. “These investments are needed now more than ever to lift up our economy for everyone.”

Meanwhile, a contingent of business owners and others have argued that raising taxes will drive away investment and wealth to lower-cost states.

The Pioneer Institute, a libertarian-leaning think tank, has repeatedly built a case against the tax proposal, releasing reports in recent months recounting the tax-related challenges for Connecticut and the migration of taxable wealth from Massachusetts to the income-tax-free states of New Hampshire and Florida.

Chris Anderson, president of the Massachusetts High Technology Council, questioned why lawmakers would pursue the tax changes when it’s still unclear how the pandemic could reshape Massachusetts’s economic landscape and how businesses operate.

“The world is 180 degrees different today than it was during the pandemic,” he said. “Once they take the vote on Wednesday, there’s no way to take this off the ballot.”

Anderson said he believes opponents are also likely to push “counter initiatives” on the ballot proposing tax changes that could offset the impact of the high-earners’ tax, should it pass. In 2018, for example, business groups pushed a measure to reduce the sales tax to 5 percent before ultimately pulling it amid a so-called grand bargain with the Legislature.

“A lot of people look at this and think they’re going to tax some fat cats sitting on a beach somewhere,” said Chris Geehern of Associated Industries of Massachusetts, which warns the change could hurt small businesses whose earnings get taxed as personal income, and thus get pushed above the $1 million threshold. “Essentially you’re taking $2 billion out of the core element of the Massachusetts economy.”

Wednesday’s vote comes at a time when Massachusetts for now appears flush with cash. State officials said Thursday that the Department of Revenue collected more than double the tax revenue than it had expected in May. Through 11 months of the fiscal year, the state has now pulled in $3.9 billion above projections and $1.36 billion more than it expected to collect for the entire year.

State lawmakers are also moving to assume control over how to spend nearly $5.3 billion in federal COVID stimulus money, a largely flexible lump of cash that can be used in the coming years.

“We just went through a hell of a time. That’s recovery money and we’ll need every penny of it,” he said. “Everybody is looking for help in some area or another with that $5.3 billion. And when that’s all gone, we’re still going to have failing roads, we’re still going to have all the things that are necessary to have a good, strong school system. . . . This will make a huge difference going forward.”