Bold Types: The CEO running his Wakefield company from an attic has a remote-work model for all | It’s all in the wording

Gladys Vega takes a bow and goes back to work; BC taps Barros; Battle brews over millionaires tax ballot wording; The value of a neighborhood bank

Andy Freed isn’t the kind of chief executive who longs for a fancy corner office. But he also never thought he would be running his company from an attic in Melrose. 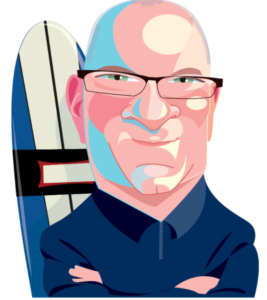 That’s exactly what the chief executive of Virtual Inc., a marketing and events business, has done since COVID-19 scattered everyone nearly two years ago. With the kids home from school, the only free spot Freed could find was amid the old furniture and high school memorabilia that cluttered his then-uninsulated attic. He led regular group sessions virtually from the room, his 210 employees getting front-row seats to his efforts to spruce it up.

Now, the place looks more like a Cape Cod cottage. Freed’s surfboard and a few beach photos and signs hang in the background.

As he prepares to bring people back to the office, Freed is also evaluating the best ways to use “Andy’s Attic” to keep everyone connected. For many chief executives, it has been tough to maintain a coherent culture amid remote work; Freed thinks “Andy’s Attic” can be a model. Last week, for example, employees chatted about Thanksgiving dishes and who had the most guests coming for dinner.

Freed also hosts guests there — virtually, of course. Among them: Steven Sbardella, the chief medical officer at MelroseWakefield Healthcare; Ted Landsmark, the social sciences professor at Northeastern University; and Chris Collins, the former NECN sportscaster. There was a “Yappy Hour” with everyone’s pets, a magic show, and a virtual farm visit dubbed “Goat-to-Meeting.”

The biggest lesson Freed learned from what he calls “Coronavirus Business School”? The importance of communication. When people are uncertain, he said, you can’t communicate enough.

“For us, maintaining community has been a really important thing,” Freed said. “One of the things Andy’s Attic has shown is that we’re all in this together.”

Virtual’s Wakefield headquarters is being renovated to install more conference rooms and video equipment. The company has scheduled a mid-January reunion in Nashville, where Virtual also has an office. After that, most employees will probably come into the office twice a week.

Virtual’s name proved to be prescient, one of those pandemic buzzwords after events like the ones Freed runs shifted online. The name actually dates back to Virtual’s launch in 1999 when the firm aimed to be a “virtual” backup team for clients.

“There was a time in the pandemic,” Freed added, “when I thought our domain name [virtualinc.com] might be our most valuable asset on our balance sheet.”

For Gladys Vega, the head of La Colaborativa in Chelsea, it was a night to remember. Eastern Bank was posthumously honoring Chau-ming Lee, the longtime executive director of the Asian American Civic Association, with the bank’s 2017 Social Justice Award at the Sheraton Copley hotel. Vega turned to her lieutenant, La Colaborativa chief operating officer Dinanyili Paulino, and said she would be floored if their organization ever received such an honor.

Flash forward four years. Vega’s dream came true, with a twist. She won the 2021 Social Justice Award. But thanks to COVID-19, her name was not up in lights in a packed hotel ballroom. Instead, Eastern chief executive Bob Rivers held a “fireside chat” with Vega at the bank’s Boston headquarters on Nov. 18; hundreds of friends and colleagues tuned in remotely.

Vega has been a force of nature at La Colaborativa, where she has spent 31 years, including 15 as executive director. The organization has been on the front lines helping hard-hit Chelsea weather the COVID-19 pandemic, and worked to ensure adequate vaccination opportunities in the communities it serves.

Did it bother her that she didn’t get a fancy party? Not in the slightest.

“For me it wasn’t about having 1,000 people and talking in front of that group,” Vega said. “This means the world to me. As an activist, we have so many fires to put out that we don’t blow our own horn. We’re just doing our work.”

Back to school for Barros

Life after politics for John Barros means a busy day job as managing principal of Cushman & Wakefield’s Boston office. But he can add another title to his resume in January: the first “visiting professional” at Boston College’s Joseph E. Corcoran Center for Real Estate and Urban Action.

Neil McCullagh, the center’s executive director, has wanted to start a visiting professional program for a while now. He said Barros’ varied experience — he led the Dudley Street Neighborhood Initiative, served as chief of economic development for former mayor Martin J. Walsh, and twice ran for mayor himself — makes him the ideal person to kick off the program.

Barros and subsequent “visiting professionals” will give several guest lectures each semester in different BC departments, and establish connections with students interested in real estate. (These professionals will receive honorariums to compensate them for their time.)

The late Joe Corcoran, founder of apartment developer and owner Corcoran Jennison Cos., launched the BC center with the goal of better preparing students for real estate and economic development careers.

“John has a particularly unique perspective given his public sector and nonprofit experience, and his future private sector role,” McCullagh said of Barros. “I look at that as being a great model.”

It’s all in the wording

Business lobbyists such as Chris Anderson are not happy that the description of the so-called millionaires tax ballot question has been written to imply the new revenue from the proposed tax on high earners will go only to transportation and education causes. That’s not necessarily the case, and appellate lawyer Kevin Martin of Goodwin Procter has asked Attorney General Maura Healey to make it clear in the description for voters of the proposed constitutional amendment that lawmakers can pretty much do anything they want with the new money.

If Healey doesn’t change the wording, Anderson said Martin would then take the issue to the state Supreme Judicial Court on behalf of the group Anderson leads, the Massachusetts High Technology Council. The goal would be to prod the SJC to rewrite the description.

“If you’re going to amend the constitution . . . it’s in our collective best interest to make sure the description fairly and accurately reflects the tax amendment,” Anderson said.

Martin and Anderson were successful with the SJC once before on this issue in 2018, when they persuaded the high court to knock the question off the ballot entirely. We’ll soon find out if they need to head back to the SJC for a round two.

Banking in your neighborhood

His first job was at the long-gone Brigham’s restaurant across the street. When his first payday arrived, he was about to head to a check cashing business so he could spend his earnings.

His boss, the late Lenzer Evans, steered Holmes in a different direction: across the street to the local Shawmut Bank branch, to open an account instead, and to start saving.

Holmes said Chase’s decision to open in Mattapan will send a positive sign for the next generation of kids in the neighborhood. And it might attract people like Holmes’ mom, who decided to try Chase because of a program that gave $200 for opening a new checking account. Holmes told the Chase employees in the audience: “She wanted to make sure you guys knew that that actually does work.”