In June 2021, the Massachusetts Legislature convened in a Constitutional Convention to give its second and final approval to an amendment that would establish a four percent surtax on income exceeding $1 million. If passed, the Amendment would be an 80 percent tax increase on thousands of employers and residents entering retirement. Despite the highest budget surpluses since the Great Recession in consecutive fiscal years, multi-billion-dollar revenue surpluses, and unprecedented federal resources, the Legislature voted 159-41 to advance the proposal to voters on the November 2022 ballot.

Why the Tax Hike Amendment Matters—And Why We Oppose It

The Council has consistently voiced concerns that the Tax Hike Amendment is misguided policy for the following reasons:

It would give a blank check to Massachusetts lawmakers, contrary to proponents’ claims that the amendment would guarantee increased spending for transportation and education

It would remove critical constitutional protection for taxpayers, changing a century-old provision requiring a uniform tax rate of five percent

It would impose a substantial burden on a significant cohort of Massachusetts businesses, including S-corporations, partnerships, limited liability companies (LLCs), and sole proprietorships

In 2022, the Council and fifty-four other plaintiffs filed a complaint with the Supreme Judicial Court challenging the Tax Hike Amendment, arguing that the proposed summary description approved by the Attorney General and Secretary of the Commonwealth does not fairly and accurately summarize for voters the true nature of the proposal.

The legal effort builds on similar litigation in 2018, when Council President, Chris Anderson, and four other plaintiffs led a successful legal challenge to the Tax Hike Amendment. That year, the Supreme Judicial Court found that the proposed Amendment violated the State Constitution’s explicit requirement that ballot initiatives contain only policy matters that are clearly related or mutually dependent and that the proponents of the Amendment improperly combined spending on education and infrastructure, which are distinct policy subjects.

As our January 2022 complaint explained, the promise of new public education and transportation spending is an empty one because the Legislature retains full discretion on spending decisions. In other words, the Amendment imposes no real limits on how the state Legislature can spend the new tax revenues.

On June 22, 2022, the Supreme Judicial Court ruled that the Attorney General does not have to change the proposed description of the Tax Hike Amendment that will appear before voters in November 2022. Though the Court’s decision did not require that the Attorney General clarify for voters the true nature of the Amendment, our litigation succeeded in an important way in revealing, beyond any reasonable dispute, that the Amendment, if adopted by voters, would not require increased spending on education and transportation.

To learn more about our litigation efforts, see the timeline below:

Where We Go from Here 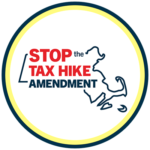 The Council is working with a diverse coalition of individuals and organizations to ensure voters understand the misleading nature of the amendment and the economic harm it would cause Massachusetts. The Coalition to Stop the Tax Hike Amendment, of which the Council is a member, is a growing group of dozens of small businesses, chambers of commerce, and industry organizations.

We will continue to amplify the truth about the misleading nature of the Amendment description and the harm the Amendment would cause Massachusetts’ businesses and residents.