Long-forgotten Tax Cap About to be Triggered

While lawmakers scramble to put together a package of tax breaks in the final days of the legislative session, a little-known law from the mid-1980s is about to alter the Beacon Hill debate over tax relief.

Record tax revenues in fiscal 2021 are expected to trigger the state’s tax cap for the first time in more than 30 years, setting the stage for Massachusetts taxpayers to claim sizable credits on their 2022 returns. 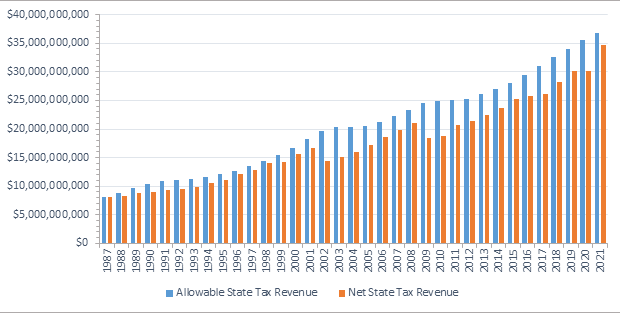 The exact size of the credits is unclear because some of the information needed to calculate them is not yet available. But sources say the amount of money at stake could be significant. It’s also unclear whether the return of the money under the tax cap will affect ongoing discussions about a package of tax breaks and cash payments to residents totaling roughly $1 billion.

The tax cap is one of those laws that has largely faded from memory. It was passed by voters in 1986, in the midst of the so-called Massachusetts Miracle. Put forward by Citizens for Limited Taxation and the Massachusetts High Technology Council, the ballot question sought to restrict how much tax revenue the state could take in, limiting the growth in revenues to no more than the growth in total wages and salaries.

Prior to now, the only time the cap has been triggered was in fiscal year 1987, when actual revenues exceeded “allowable revenues” by $29.2 million, according to an auditor’s report on the cap. The report said individual taxpayers were allowed to claim credits on their 1987 tax returns for their share of the $29.2 million, but not everyone did. Only $16.8 million in credits were issued, leaving $12.4 million unclaimed.

Now the process is set to resume again for the first time in 35 years.

Officials in the governor’s office and the Department of Revenue did not respond to questions about the tax cap.

State Auditor Suzanne Bump typically certifies in September the state’s allowable revenues and actual revenues, the numbers needed to determine the size of the tax cap credits. Her office said there would be no comment on the tax cap until all those numbers are available.

Allowable revenues are based on a calculation of the percentage growth in wages and salaries multiplied by the previous year’s allowable revenue. Actual revenues for fiscal 2022 won’t be known until numbers for June, the final month of the fiscal year, are released. Through the end of May, however, tax collections totaled $36.9 billion, up $6.5 billion, or 21.4 percent, from the previous year.

Evan Horowitz, executive director of the Center for State Policy Analysis at Tufts University, said his rough calculations indicated allowable revenues would be $38.5 billion. With actual tax revenues through May at $36.9 billion, the amount to be returned in the form of credits to taxpayers will depend on the June numbers. Horowitz estimated about $1.2 billion would have to be returned to taxpayers based on his forecast of revenues for the year.

Jim Stergios, executive director of the Pioneer Institute think tank, said his staff reviewed the numbers after being told about the situation.

“We’ve looked closely at revenues through May. While we don’t have the final June numbers, the economy is generating a ton of state tax revenue — so much so that it looks like the 1986 revenue cap will kick in for the first time in decades. Taxpayers across the state may get refunds, and the totals could be substantial,” he said in an email.

Chris Anderson, president of the Massachusetts High Technology Council, said he had been working at the council for two years when the 1986 ballot campaign for the tax cap was mounted. He said the purpose of the tax cap ballot question was to rein in government spending.

“It was designed to act as a governor on what the Legislature has to spend,” he said. He noted an unsuccessful court challenge to the question was filed by the Tax Equity Alliance for Massachusetts, or TEAM, which was headed by Jim Braude, who today is a radio and TV host at GBH.

Anderson said the expectation was that the cap would be triggered more than just once over the years, but he said wage and salary growth has been bigger than tax revenue growth until now. “This year the revenue growth was so astronomical,” he said.

Sources said a number of top officials on Beacon Hill are aware of the tax cap but have not gone public with the information. The sources said issuing the tax credits should not affect the current year’s budget, but could have an impact in future years as the credits are claimed.

News of the tax cap trigger comes as the Legislature and Gov. Charlie Baker prepare to offer a series of expanded tax credits and/or rebate checks to Massachusetts residents that could total $1 billion. The package includes expanded tax breaks for renters, seniors who own their own homes, children, and low-income people. The package also includes rebates of $250 to $500 for moderate income residents and a sharp reduction in the estate tax. The House and Senate are currently trying to work out their differences on the tax relief package; the legislative session ends on Sunday at midnight.