As Healey takes office, business leaders are looking for her to tweak state’s tax structure to make Mass. more competitive in a work-from-anywhere world. 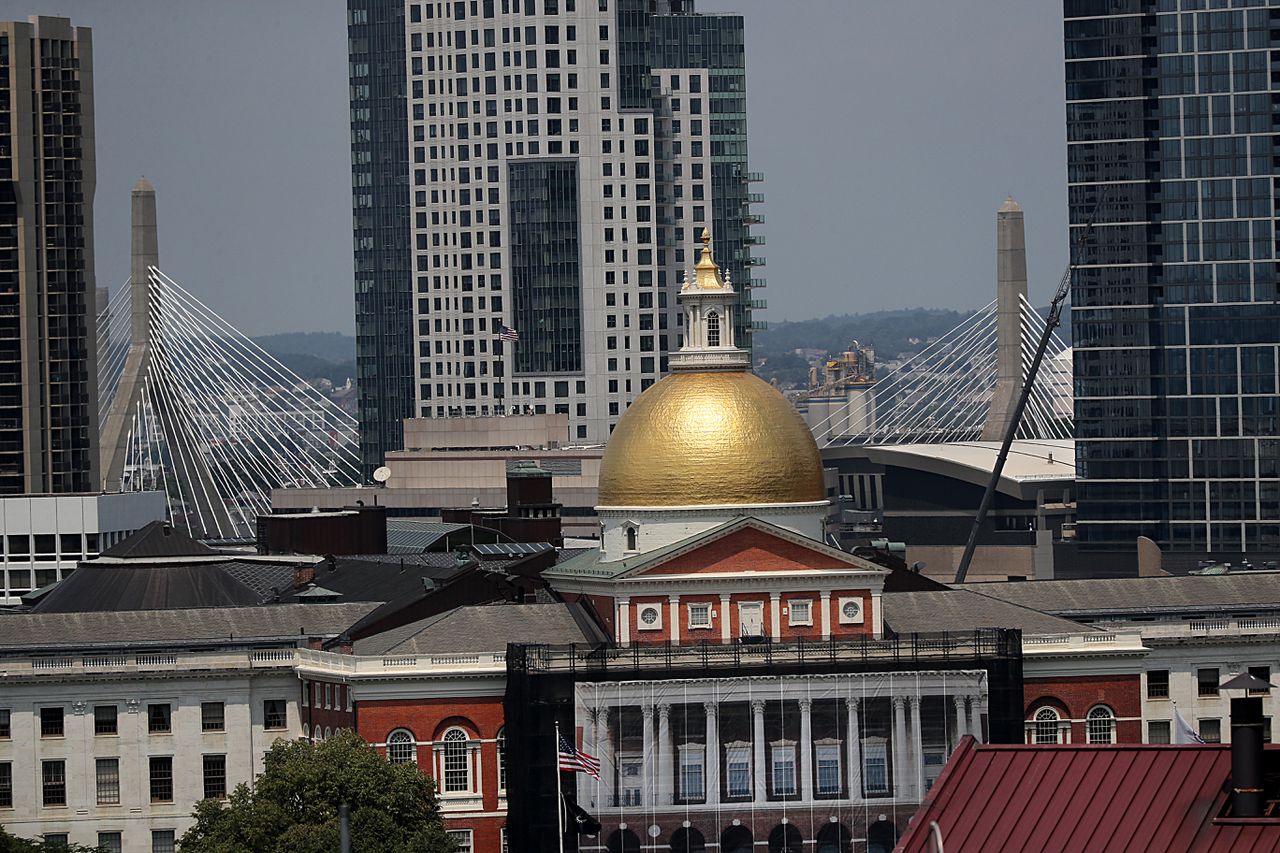 As Maura Healey prepares for her first speech to a business group as governor next week, she should get ready to talk taxes.

Still smarting from the lost ballot fight over the so-called millionaires tax and the Legislature’s failure to adopt a tax reform package, business leaders are eager for the newly-elected Democratic governor to address policy issues that they say prompt people and businesses to relocate or decide not to come here.

Can Healey work with the Legislature to improve the state’s economic competitiveness? That’s the pressing concern among Associated Industries of Massachusetts, which hosts Healey on Jan. 26, and among numerous other business groups.

They want Healey to address the relatively high cost of doing business here by tackling challenges such as anemic housing production, congested highways, a crumbling transit system, and inadequate child care. Then there’s this request: Get tax reform done, at last.

“There are things she can do to send a signal to the investment world, that [say] ‘forget about that millionaires tax thing, we’re open for business here,’” said Steve Tocco, chairman of Boston lobbying firm ML Strategies.

They want Healey to address the relatively high cost of doing business here by tackling challenges such as anemic housing production, congested highways, a crumbling transit system, and inadequate child care. Then there’s this request: Get tax reform done, at last.

“There are things she can do to send a signal to the investment world, that [say] ‘forget about that millionaires tax thing, we’re open for business here,’” said Steve Tocco, chairman of Boston lobbying firm ML Strategies. 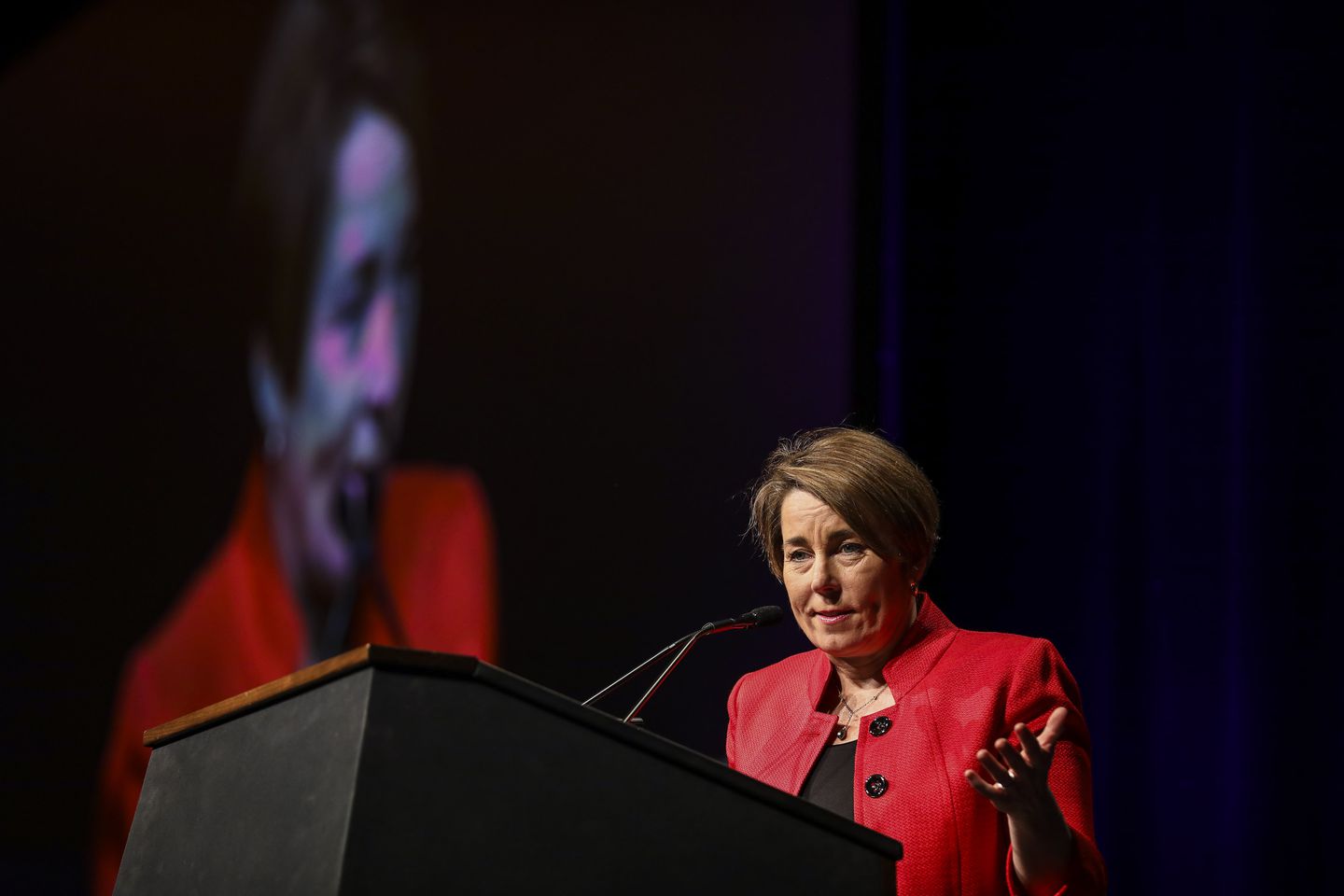 Healey has said she understands the urgency but so far has given few specifics. All a spokeswoman would say is that the new administration is looking forward to “working together with the Legislature on efforts to make Massachusetts more affordable and support seniors, working families, and small business owners during these challenging economic times.”

Business lobbyists are eager for changes to the estate tax, in particular, because it can be an important factor when wealthy individuals and business owners decide which state they will call home. In Massachusetts, the tax currently kicks in for estates worth $1 million or more, for the entire value of an estate. Baker’s proposal would have pushed that threshold to $2 million, and only the value above $2 million would be taxed. Massachusetts is a big outlier: Only one other state, Oregon, has a threshold as low as $1 million — and estates there are only taxed on the value above that point.

With the millionaires tax vote, aka Question 1, the business community was outmaneuvered and outspent by teachers unions and their allies among community advocacy groups. Starting this year, the measure imposes a 4-percentage point surcharge on the state’s income tax rate, currently 5 percent, for household earnings above $1 million. Anecdotes are starting to circulate about high earners changing their residency as a result. It will be some time before we have data to back that up, but business leaders are already worrying about the message the surcharge sends.

The pro-business Tax Foundation think tank in Washington put Massachusetts in 34th place — firmly middle-of-the-road — in its latest ranking of state tax climates last week. But that calculation was based on state policies as of July. Had the “millionaires tax” been in place then, Massachusetts would have been 46th, a statistic that inevitably will be raised in tax reform arguments.

“We need to take a step back and think, how are we going to compete with other states that are frankly more aggressive and playing the game differently?” said Jim Rooney, chief executive of the Greater Boston Chamber of Commerce.
Another stat that’s sure to come up: Massachusetts is already among the top states for population loss during the COVID-19 pandemic, even before the millionaires tax took effect.

“Particularly with Question 1 passing, how do you not do the estate tax?” said Retailers Association of Massachusetts president Jon Hurst, who said two-thirds of his group’s members plan to sell their business or retire within the next decade. “It would be two shots to the gut if you do Question 1 and you don’t pass the estate tax.”

With regard to Question 1, Rooney said maybe Healey should “take a hard look” at the possibility of exceptions to shield so-called one-time millionaires — people whose sales of a business or property cause them to earn more than $1 million in one year. 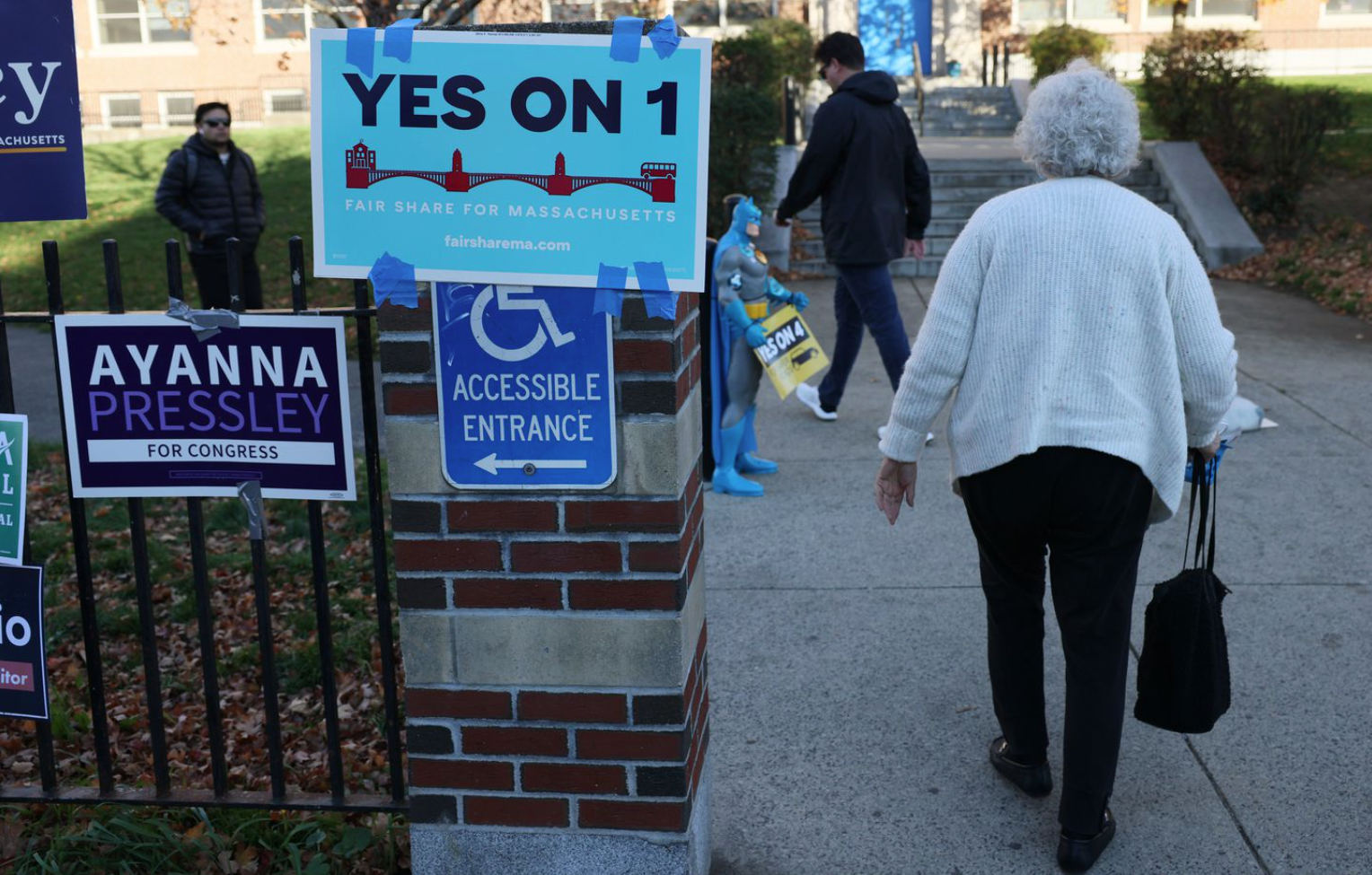 Voters walk past a sign saying “Yes on 1” outside of an East Boston polling location. JESSICA RINALDI/GLOBE STAFF

Associated Industries of Massachusetts is pushing for a suite of reforms. One such proposal, to lower the income tax rate across the board, would help offset Question 1′s impact. AIM executive vice president Brooke Thomson said the group’s legislative agenda is designed to improve the state’s “economic health,” with policies that deter relocations and help businesses that can’t move. Thomson said she was encouraged that Healey made it clear, during her inaugural speech on Jan. 5, that she is listening to the business community.

Some pro-business reforms could be a tough sell in the Democratic-controlled Legislature, which has voted overwhelmingly for enshrining the income-tax surcharge in the state constitution.

A spokesman for the Fair Share Massachusetts coalition, the force behind that constitutional amendment, said that, for the first time in its history, Massachusetts has a “fairer tax system that asks more from those at the top.” The coalition, he said, would fight any effort to weaken the surcharge.

Phineas Baxandall, policy director at the left-leaning Massachusetts Budget and Policy Center, said concerns about the surcharge are overblown. Proceeds are slated for public education and transportation; Baxandall notes that businesses will benefit from increased public investments in both areas. He said he’s skeptical about a significant exodus, especially with the rates for the highest brackets in California and New York still far exceeding the one in Massachusetts.

“Unless those get cut in half, I don’t think we need to wring our hands about tax competitiveness,” Baxandall said.

But Chris Anderson, president of the Massachusetts High Technology Council, said a “rapid outmigration of Massachusetts business leaders, high wealth individuals, and job creators” is already underway, particularly to states such as Florida and New Hampshire that have no income tax at all.

Anderson said Healey needs to be sensitive to the likelihood of another recession this year. He suggested the possibility of removing the surcharge from the constitution should be seriously considered. The years-long process would require the approval of the Legislature — not to mention another statewide vote, no sooner than 2026.
“Massachusetts is the only state going into this recession with the added burden of a … ‘Taxachusetts policy,’” Anderson said. “There’s only one way to recover from that, to try to figure out how to remove this from the constitution.”

That sure sounds like a long shot today. But the fact it’s even being discussed shows how intensely the business community is watching Beacon Hill right now, waiting for some form of tax relief.