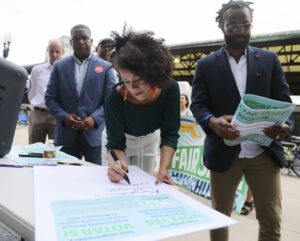 Boston City Councilor Julia Mejia was among the politicians signing a petition in support of the Fair Share Amendment campaign during a rally in June. MATTHEW J LEE/GLOBE STAFF

Massachusetts has nearly $5 billion in unspent federal stimulus dollars to spread to its residents. At least another $8 billion in aid is coming from the US government to help repair roads, bolster public transit, and shore up the state against climate change. The state’s tax receipts are again running well ahead of expectations.

This is good news for Massachusetts. But the heady fiscal times could also complicate a question that voters are set to answer in the November 2022 election: Should Massachusetts raise taxes on its wealthiest residents to generate billions more for the state to spend?

A proposed constitutional amendment that would layer a surcharge on yearly earnings above $1 million will land on the ballot in 2022, years after it first surfaced during a time of mounting needs for Massachusetts’ school and transportation systems — and of financial uncertainty for the state.

The yawning shortfalls and prospective billion-dollar budget gaps of several years ago, however, have been replaced by an unexpected budget surplus, a state emergency savings account that’s surged to a record $4.6 billion, and multibillion-dollar buckets of federal aid that lawmakers say can bring “generational change” to Massachusetts.

That perception of a flush state government has shifted the ground under the intensifying debate between labor unions and activists, who warn the state’s needs will far outstrip its current financial good fortune and business leaders who caution that hiking taxes on the rich could unnecessarily undercut the state’s competitiveness.

“It’s a totally different landscape about the need to raise revenue and what the revenue is for,” said Evan Horowitz, executive director of the Center for State Policy Analysis at Tufts University, which studies state ballot questions. “In the short term, it has weakened the argument for any kind of immediate tax increase. The state is not desperately looking for money. What I don’t know is if it fundamentally changes the long-term issues” the revenue could be used to address.

The so-called millionaires tax would impose a 4-percent surtax on annual personal income above $1 million. According to a state analysis that is now six years old, the measure could generate anywhere between $1.6 billion and $2.2 billion in revenue each year, though opponents argue the estimates are inflated.

Its supporters say the money could immediately go toward financing the state’s new school funding system passed in 2019 while also helping rebuild the state’s crumbling roads and update a woefully underfunded MBTA. They also argue the measure, dubbed the Fair Share Amendment, would inject equity into what they describe as an unfair flat state income tax rate, which is currently set at 5 percent.

“The Fair Share Amendment is not about one budget cycle. It’s about making generational investments over the next 10, 20, 30, 40 years,” said Andrew Farnitano, a spokesman for Raise Up Massachusetts, the coalition that’s organized behind the effort since 2015. “From our perspective, the need for the investment has never been greater coming out of the pandemic.”

During the public health crisis, the state has also reaped newfound and unexpected resources. Legislative leaders are still negotiating the details of a roughly $4 billion package that pulls money from $4.9 billion in federal American Rescue Plan Act aid and a $1.5 billion state surplus.

Once they reach an agreement, there will likely still be billions left to be spent in the months or even years ahead, when the state could also see even more extra cash. Through October, Massachusetts had collected $723 million more in tax revenues than it was expecting through those four months of the fiscal year, a trend that Alan Clayton-Matthews, an economist and Northeastern University professor emeritus, said sets the state up to “most certainly” see a surplus by the end of June.

“I think people will have the feeling that times are good, as far as revenues for the state go,” he said.

The state can also expect to receive at least $8.5 billion over several years through the new federal infrastructure law, including funding for airports, public transit, bridges, and electric vehicle chargers. It’s money that can effectively target one of the primary goals of the millionaires tax: Seeding badly needed capital work.

The tax proposal’s proponents — including all three Democratic gubernatorial candidates — say that while the federal aid can help jump start a variety of projects, it’s not a substitute for a long-term tax increase.

Some officials also question how far the infrastructure bill funding can ultimately go. “The jury is out if it is going to be truly transformational,” said Senator Sonia Chang-Díaz, a Jamaica Plain Democrat running for governor.

“Those who don’t want to pay for it are going to use what we’re dealing with at the moment and make an argument, ‘Gee whiz, the Fair Share Amendment really isn’t needed now,’ ” said Representative James J. O’Day, who sponsored the amendment.

“I get a little annoyed when people say, ‘Oh my goodness, we have money today.’ This is a short-term fix,” the West Boylston Democrat said of federal aid. “The Fair Share Amendment isn’t a sprint. It’s not a one-time deal, not a two-time deal. It’s annually. That can only be a benefit to our families, to our communities, to our businesses, to infrastructure.”

But opponents say the current big pots of money shouldn’t be ignored at the ballot box, even if it’s not the only reason they are pushing voters to reject the proposal. By writing the tax change into the Massachusetts constitution, critics argue, it restricts the state’s ability to change the language should officials later want to amend or repeal it.

The process of amending the constitution requires votes in successive two-year sessions before a proposal can go to voters. And in the millionaires tax proposal’s case, it will ultimately take seven years after advocates first began collecting signatures in 2015 but saw the Supreme Judicial Court reject an earlier iteration of the measure before it could make it to the 2018 ballot.

“You can be for more transportation revenue, which we are, and not support this tax increase,” said Eileen McAnneny, president of the business-backed Massachusetts Taxpayers Foundation, which in September warned the MBTA is staring down “fiscal calamity” in the coming years. McAnneny suggested state officials should instead consider raising the gas tax or hiking fees to address needs beyond the federal aid.

“Amending the Constitution to include a tax just doesn’t make sense,” she said.

Business leaders have also repeatedly challenged the assertion the money would go toward education and transportation as promised, noting it would technically be “subject to appropriation” — a phrase that gives the Legislature wide latitude in deciding the fate of funding.

The Massachusetts High Technology Council sent a letter to Attorney General Maura Healey and Secretary of State William F. Galvin asking that the description of the ballot measure sent to voters include a line stating that the Legislature could ultimately reduce funding on education and transportation from other sources and simply replace it with the new surtax revenue.

The tax debate is likely to seep into other races on the 2022 ballot. Governor Charlie Baker — who has opposed broad-based tax increases and indicated he, too, is against the millionaires tax — has cast doubt on the proposal’s need given the federal aid.

He’s also questioned how much it would actually raise. The second-term Republican, who has yet to say whether he’ll seek a third, has echoed business leaders in suggesting the tax could push high earners out of Massachusetts. “We should be very careful about . . . how much we think we might raise through something like the Fair Share tax,” Baker said on GBH’s “Boston Public Radio” in September.

One Republican who is already running for governor next year, Geoff Diehl, a former state representative, also opposes the proposal, saying it would have a “chilling effect on economic development.”

Democratic candidates, however, have embraced it. Danielle Allen, a Harvard professor, said she supports the proposed amendment, saying federal aid will only address the “initial hurdles” in investing in infrastructure. But she also suggested officials could revisit the need for it at a later date. “It doesn’t mean you need to have it in perpetuity,” she said.

Ben Downing, a former state senator, said that people can argue the federal funds may be enough “to manage the status quo,” but that the state’s needs demand more, leaning into criticisms he and other Democrats have lobbed at what they view as Baker’s incremental approach to governing.

“It’s important to ask candidates who don’t support the Fair Share Amendment why we should be reliant on the federal government to fund things we consider priorities,” he said.

Jon Chesto of the Globe staff contributed to this report.