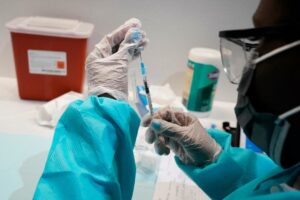 BOSTON, MA.—November 7: A woman receives a booster shot of the Pfizer vaccine during a COVID-19 vaccination clinic at the Chelsea Senior Center on November 7, 2021 in Chelsea, Massachusetts. (Photo by Amanda Sabga/MediaNews Group/Boston Herald)

Courts around the country have eaten away at President Biden’s vaccination mandate for both federal contractors and employers with over 100 employees, leaving those tasked with implementing the edict in the lurch.

“There really is a lot to think about for employers, and the uncertainty surrounding the court challenges throws another bit of complexity into the whole calculation,” said Chris Geehern, executive vice president of public affairs at Associated Industries of Massachusetts.

As of now, the Occupational Safety and Health Administration, or OSHA, cannot enforce the large employer mandate, which would require all employees to get vaccinated or submit to weekly testing, pending a U.S. Court of Appeals decision.

In the meantime, Geehern said, employers are taking different approaches while they await a decision, with the mandate otherwise set to kick in on Jan. 4. “Some companies are kind of taking a wait-and-see attitude, to see how the courts will ultimately decide the issue,” Geehern said. Others are getting the vaccine verifications and other protocols “in place and ready to go” should the mandate take effect, he said.

Geehern said employers are also unclear on how many employers constitute the 100 needed to enforce the mandate. “It’s a little confusing, because, for example, if I’m a remote employee, under the order, I don’t have to be vaccinated, I don’t fall into the order, but I still count toward the 100 employee threshold for a company,” he said.

“Many employers, unless it’s a significant number that impacts the workplace, are more inclined to let them go, particularly if the submission from the employee cites Scripture and gets into some detail on what their sincerely held religious belief is,” he said.

She’s also had employers, many in the life sciences industry, begin “some pretty aggressive pushback” against religious exemption claims citing the fact that the vaccine was developed using a cell line sourced from fetal tissue. Some employers question whether employees take any of the common over-the-counter medications that also used that cell line.

Though court mandates and unclear exemptions have been confusing, Geehern still urges companies to start or continue vaccine verification efforts.