With Charlie Baker out, who will big business back for governor?

After three straight governors with close ties to the state’s private sector, business leaders wonder if they’ll still have a friend in the corner office on Beacon Hill

Massachusetts has a history of electing governors with deep experience in the private sector. But with Charlie Baker bowing out of another term there’s no longer a candidate the business community perceives as a friend. 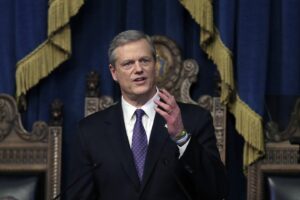 That has set off a flurry of behind-the-scenes strategizing since Baker’s announcement on Wednesday about whom business leaders might back to succeed him. The current field skews progressive on the Democratic side and Trumpist on the Republican side, which leaves a wide opening in the middle.

And with the race far from formed, some business leaders are wondering if they should jump in themselves — weighing their willingness to self-fund, their ability to raise millions of dollars, and whether they can build enough name recognition to win an election that takes place in less than a year.

Of course, there are big names in the wings — Attorney General Maura Healey and former Boston mayor and current Labor Secretary Marty Walsh, both of whom are reportedly mulling bids. Their entrance into the race would make it harder for political newcomers to gain traction. Sure, Deval Patrick, an attorney who never had been elected to office, won in a landslide in 2006. But he was an exceptionally charismatic campaigner who spent close to two years on the ground building a base.

The governor has a huge influence on the state’s economy and the success of its business community, setting policy on taxes and a range of programs — from workforce development to housing — that affects their ability to expand and recruit and retain workers.

Candidates, in turn, court business leaders because they represent a significant source of campaign donations. And for now, that money has been sitting on the sidelines.

“When I talk to my members, they’re saying, ‘I’m waiting to see who is jumping in before I make donations,’” said Jen Benson, president of progressive business group, the Alliance for Business Leadership, and a former state representative. “That is a big piece of the cog that we really have to acknowledge. That is one of the ways the business community has a lot of influence.”

Like others in the business community, John Fish, chief executive of Suffolk construction and a major political donor, describes himself as being in a “wait and see” mode on whom to support. Fish is among prominent CEOs who had urged Baker to run for a third term, in part to provide political stability after Boston has gone through three mayors in one year.

For Fish and his Boston-based firm, the relationship between Beacon Hill and City Hall is paramount. Baker and Walsh got along so well the media dubbed the bond a “bromance.” Fish had high hopes that Baker and new Boston Mayor Michelle Wu — both Harvard-educated policy wonks — can work well together.

“If people get along well, things will get done.,” said Fish. “Now all of a sudden we are back to the drawing board.”

Outside of Boston, the focus is finding another pro-growth governor who can navigate both private and public sectors, said Tim Murray, chief executive of the Worcester Regional Chamber of Commerce and lieutenant governor under Patrick.

“Jobs matter,” said Murray, who added that it’s early to dub anyone a “business-friendly” candidate. “There is an opportunity for all the candidates to make the case how they are going to encourage job expansion and growth.”

Many a gubernatorial candidate has come out of the business world, pitching themselves as having the management skills to run the Commonwealth. And voters have rewarded that pitch three times in a row. Baker, a Republican, had been the chief executive of Harvard Pilgrim Health Care and worked at venture capital firm General Catalyst. Patrick served as general counsel, first at Texaco and later at Coca-Cola Co. Mitt Romney, a Republican, founded Boston private equity firm Bain Capital.

Not surprisingly this time, there are business types who aspire to become the CEO of Massachusetts. Doug Rubin, architect of Patrick’s winning campaign, has fielded calls from a number of them.

“There are a lot of people who were surprised by Baker’s decision, and a lot of people who might have thought they had four years” to put together a campaign, said Rubin, who runs Northwind Strategies, a political and public relations consulting firm.

Rubin said he believes there is a lane for a moderate, business-friendly candidate, but acknowledged it would be a difficult path if a well-known candidate such as Healey or Walsh entered the race. Both could win over many of the business leaders. Healey worked at law firm WilmerHale representing clients in financial services, biotechnology, software and pharmaceutical sectors. Walsh, despite his labor union roots, forged a good relationship with developers and business leaders while mayor of Boston.

“If you are going to run for governor,” added Rubin, “you have to feel like you have something to say and there is a unique value proposition to it.”

Complicating matters, the business community is no monolith. Big employers and small-business owners have vastly different needs. So do startups and established firms, and those in Greater Boston compared with Western Massachusetts or other corners of the state. And increasingly, there is a split on political values.

“There is not a single business community,” said Mohamad Ali, chief executive of International Data Group, who counts himself in the progressive wing and has had his own ambitions to run for office some day.

And some business leaders worry the current drumbeat for economic and social change may come at the expense of the private sector at a time when the pandemic has upended how and where people work. Pulling too far left may make some companies skittish about staying in Massachusetts, said Chris Anderson, president of the Massachusetts High Technology Council.

Maintaining the business-friendly balance that has long prevailed on Beacon Hill, he said, is key to the state’s future.

“We have a solid private sector capacity here,” Anderson added. “We don’t want to mess it up.”

Shirley Leung is a Business columnist. She can be reached at shirley.leung@globe.com.