Baker signs $4B ARPA bill but pushes back on how to deploy bonuses, health funds

Gov. Charlie Baker on Monday signed $4 billion legislation allocating a large chunk of the state’s American Rescue Plan Act funding, but he rejected a handful of provisions approved by lawmakers that he said would delay distribution of the money. 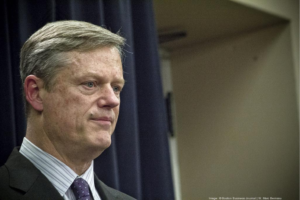 Baker’s signature marks the culmination of a months-long process to determine how to best use the federal Covid-19 aid, which must be allocated by 2024 and spent by the end of 2026. The Democratic-controlled Legislature must now weigh whether to seek to override any of Baker’s vetoes.

One of Baker’s vetoes concerned the bonuses. The Republican governor approved the $500 million allocated to lower-wage employees who worked in-person during much of the pandemic, he said in a letter to lawmakers. However, he vetoed parts of the bill calling for a 28-member advisory panel to counsel on the design of the program.The bill relies on $2.55 billion of the state’s ARPA funds and $1.45 billion in state surplus from fiscal year 2021. Priorities in the legislation include spending on the state’s health care system, housing, unemployment insurance relief and bonuses for essential workers. (For a more detailed rundown of the approved spending, see the list below.)

The panel is designed in such a way “that is virtually guaranteed to significantly hinder disbursement of the funds,” Baker said. By signing two of the sections making up the bonus program, he added, his administration can begin the process of sending out the money.

“We could send out $500 checks to almost 1 million Massachusetts residents as soon as possible. Reinstituting the panel-driven process envisioned by the Legislature will simply disrupt the rollout midstream,” Baker wrote in the letter. “We urge you to let our administration proceed with this important program today.”

In the bill passed by lawmakers, the state would launch a 20-member advisory commission that would send recommendations to the Legislature on how to spend some $198 million the trust fund. Instead, Baker proposes having Health and Human Services Secretary Marylou Sudders distribute the funding with the option of taking the advisory commission’s input.

“The advisory commission should be just that: advisory, not the first step in a second round of an already protracted appropriations process,” Baker wrote in a separate letter to legislators.

The governor has tussled with lawmakers for much of 2021 over the speediness with which the ARPA funding should be spent. Baker put forward a nearly $3 billion package this summer, but Democratic legislative leaders opted to hold hearings on proposed uses of the money through the fall, not passing a final version of the legislation until earlier this month.

It also includes $500 million for the state’s unemployment insurance trust fund. Some business groups had pushed two or three times as much money, though the current financial status of the fund remains unclear because the administration has not produced a monthly report on the fund since June.

“To put the $500 million in UI relief into perspective, consider that the Massachusetts UI system has paid out more than $24 billion since the start of the pandemic in the spring of 2020,” the Massachusetts High Technology Council said in a statement. “As a result of these unprecedented outlays, the Commonwealth’s private sector is still on the hook for billions in outstanding payments and obligations.”

Here are the major spending provisions lawmakers and Gov. Charlie Baker approved in the relief package: