The business tax climate in Massachusetts remained among the worst in the U.S., according to a newly released index, but it’s still doing better than its Southern New England neighbors — and far better than New York or New Jersey. 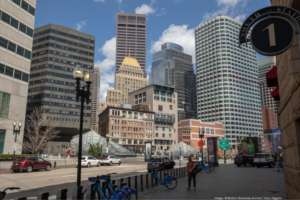 A view of Boston’s Financial District as seen from South Station. The Tax Foundation, a pro-business organization, has ranked Massachusetts 34th of the 50 states for its business tax climate. GARY HIGGINS / BOSTON BUSINESS JOURNAL

The Bay State ranked No. 34, compared with 35th last year, in the just-released 2022 State Business Tax Climate Index put out by the Tax Foundation, a pro-business organization based in Washington, D.C.

Rhode Island ranked 40th among the 50 U.S. states, two spots lower than its No. 38 showing in the foundation’s 2021 report. Connecticut ranked even worse, at 47.

New York was ranked 49th, behind only New Jersey, which landed dead last. Wyoming was ranked No. 1.

This year, Massachusetts was ranked 36th for corporate taxes, 11th for income taxes, 12th for sales taxes, 44th for property taxes, and 50th — dead last — for its unemployment tax system.

The report’s authors argue that in today’s world — where labor and capital are mobile — tax climate differences between the states matter more than ever.

“State lawmakers are right to be concerned about how their states rank in the global competition for jobs and capital, but they need to be more concerned with companies moving from Detroit, Michigan to Dayton, Ohio than from Detroit to New Delhi, India,” the report maintains.

“Massachusetts continues to lose population and tax revenue to outmigration. A high tax burden combined with pending new tax proposals in Massachusetts will accelerate that trend,” said Chris Anderson, president of the Massachusetts High Technology Council Inc., a statewide industry group. “The robust performance of our private sector, which has fueled multibillion-dollar state budget surpluses, is not immune to the lure of more competitive state environments for investment and job growth in places like Texas, New Hampshire, and Florida.”

In response to the ranking results, J.D. Chesloff, executive director of the Massachusetts Business Roundtable, said Massachusetts’ great competitive advantage has always been the access to world-class talent it offers businesses. But as the Tax Foundation points out, talent is more mobile today.

“The pandemic has proven that remote work can be successful regardless of location, and that talent now has the flexibility to be increasingly mobile,” Chesloff told the Business Journals. “In order to retain our competitive advantage, Massachusetts must prioritize the development, recruitment, inclusion and retention of talent balanced with a cost environment that avoids the risks of losing it.”

For its part, the Rhode Island Public Expenditure Council (RIPEC) chimed in this week with its own take on the Tax Foundation report, publishing a policy brief and executive summary.

Because Rhode Island is flush with federal funds right now, DiBiase said policymakers “need to be even more vigilant to protect the progress we have made over the years.”