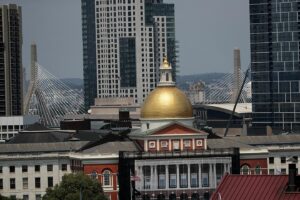 Proponents of an income tax surcharge for higher earners in Massachusetts say the tax would bring in roughly $2 billion a year for transportation and education. A new study suggests that could be wishful thinking.

A report released Thursday by the Center for State Policy Analysis at Tufts University shows the so-called millionaires tax may actually generate about $1.3 billion a year, roughly two-thirds of the figure suggested by the ballot question’s supporters.

The reasons for the downshift are twofold. Tufts researchers are factoring in some flight to states with essentially no income taxes, such as New Hampshire or Florida. But a much bigger factor, according to the report, is the number of high earners who would will likely reduce their income tax burden through accounting maneuvers and other tax-avoidance strategies.

“You’re talking about a group of people that’s well positioned to get information about tax avoidance and engage in sophisticated forms of tax planning,” said Evan Horowitz, the report’s author.

Horowitz said the Tufts center does not take a position on the ballot questions that it analyzes. However, he said a potential return of $1 billion-plus indicates the new surcharge would still be an effective way to raise revenue for the state and improve socioeconomic equity.

“It doesn’t strike me as anything to sneeze at,” Horowitz said of the projected receipts. “It’s still a very substantial amount of money. … From a financial and economic perspective, there’s still a perfectively sensible, reasonable argument to implement the tax because it’s raising money from the wealthiest households in a way that’s quite progressive.”

The Tufts researchers use data from previous academic reports about taxpayer behavior in other states where similar policy changes have occurred to extrapolate how high-earning taxpayers in Massachusetts may respond.

If approved by voters in November, the ballot question would impose an extra 4 percentage-point tax on earnings above $1 million, on top of the existing state income tax of 5 percent. In 2019, the most recent year that data is available, roughly 21,000 taxpayers reported incomes of more than $1 million, or 0.6 percent of all households in the state. Based on previous patterns, the Tufts researchers estimate there would be about 26,000 in 2023, the first year the surcharge would take effect, and it would bring in about $2.1 billion from that group.

However, once the Tufts researchers factor in an estimated loss in revenue of $100 million, from people who would leave the state in reaction, and another $670 million for people who use techniques to avoid the tax, the annual take drops to roughly $1.3 billion.

Much attention has been paid to the potential flight of high earners; a 2018 report from the libertarian-leaning Pioneer Institute, which opposes the surcharge, argued that the exodus could cut in half the estimated $2 billion in receipts. The issue of “tax avoidance,” however, has rarely been raised in the debate so far. Horowitz argues that the vast majority of high earners have close connections to their communities and would be unlikely to leave.

The union-funded Raise Up Massachusetts coalition has been pushing the millionaires tax, dubbed the Fair Share Amendment, for several years to ostensibly raise money for education and transportation causes. However, to impose a graduated tax rate such as this one, a ballot question to amend the state constitution must win approval by the voters. The state Supreme Judicial Court rejected an earlier version after it was challenged by business groups. The newer version was filed in a way to avoid the major legal pitfalls related with the earlier attempt.

Raise Up spokesman Steve Crawford issued a statement Thursday pointing out that everyone agrees “the Fair Share Amendment will raise well over one-billion dollars of much-needed funding.” He said the money could fix crumbling roads and bridges, improve schools, and provide vocational training for people looking for good-paying jobs. He also noted that the ballot question continues to perform well in polls. The latest such tally, released on Thursday by MassINC and the Barr Foundation, found that 70 percent of voters surveyed support it, mirroring similar levels of enthusiasm seen in earlier polls.

“As Massachusetts families continue to struggle with the ongoing COVID pandemic, voters simply want the wealthy — those who have prospered during this crisis — to pay their fair share,” Crawford said.

Chris Anderson, president of the Massachusetts High Technology Council, is seeking to ensure that the description shown to voters indicates there is no guarantee that all the money raised by the tax would actually result in corresponding increases in school and transportation funding. Anderson, who led the challenge to the previous version of the question, said he expects the high tech council will file a complaint to accomplish this goal with the state Supreme Judicial Court within the next few weeks.

“The money is fungible,” Anderson said. “The Legislature can do whatever they want with it. … It doesn’t necessarily mean that current levels of spending will increase by a penny.”

Anderson argues that the millionaires tax will simply accelerate the current exodus. While Massachusetts’ population grew 7.4 percent in the 2010s — the fastest rate in the Northeast — Census figures released in December show the state lost 37,000 people last year, a 0.5 percent decline that was the sixth-steepest in the United States.

The problem is, the higher earners who could end up leaving tend to play an outsize role in the economy, Anderson said.

“The most imminent tax avoidance here is the acceleration of people leaving Massachusetts and taking their taxable wealth to more hospitable climates, like Texas, Florida and New Hampshire,” Anderson said. “When do you reach a point where you create enough of a disincentive for the people driving our economy [against doing] it in Massachusetts?”