Business leaders react to Raytheon’s HQ move out of Mass.

Some business leaders around the state told the Business Journal that they don’t expect a big practical impact from Raytheon Technologies Corp. plan, announced Tuesday morning, to move its headquarters to Virginia after 100 years in Massachusetts. 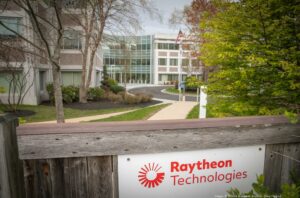 However, one professor from the University of Massachusetts is warning that the move could come with a subtle negative effect: less loyalty to the state Raytheon called home for 100 years.

Raytheon (NYSE: RTX) said that its new global headquarters move to Arlington, Virginia will become effective later this year, ending its century-long residence in the Bay State. The defense contractor (NYSE: RTX) plans to maintain its presence in Massachusetts, including its existing Waltham office, and the company says the move won’t impact its more than 12,000 local employees.

When a large employer moves its headquarters out of the state, there’s the risk that its top executives will be less loyal to the region if and when they need to make job cuts, said Robert Nakosteen, professor emeritus at the University of Massachusetts Amherst’s Isenberg School of Management.

Executives “are not socially in the area. Nobody’s coming up to them and saying, ‘Why are you shutting down this plant?’” Nakosteen said.

Raytheon’s local headcount went from 15,000 as of last year, according to Business Journal research, to over 12,000 as of Tuesday, as confirmed by a Raytheon spokesperson. The company did not immediately comment on the reasons behind the headcount reduction, which made them one of the headcount “losers” among publicly-traded companies in the past two years.

Christopher Anderson, president of the Massachusetts High Technology Council, said that such headquarter moves are becoming easier for companies to make in a post-Covid environment, when at least part of the workforce is able to work remotely.

Anderson said he believes Raytheon’s move to Virginia was “purely designed with customer proximity in mind.” Other top defense contractors such as Boeing already have a presence in, or announced plans to move to, the D.C. area.

Anderson added that the move “is more about perception than taxes and real economic impact,” as it comes with “zero impact” to the thousands of local employees in Massachusetts.

“They’ll still be here, tapping the local talent pool and conducting business” in the Bay State, he said.

And John Regan, president and CEO of the Associated Industries of Massachusetts, agreed that the move will have little practical effect. “The move is designed to move the headquarters closer to key customers in the public and private sectors while the work will continue in Massachusetts. Given that, the impact should be minimal,” he said.

Jeff Bussgang, general partner and co-founder of Boston VC firm Flybridge Capital Partners, said in a text message that the company already has “zero footprint in the Boston entrepreneurial ecosystem.”

“Raytheon doesn’t invest in the startup ecosystem and doesn’t partner as a lighthouse customer with startups,” he wrote. “They’re essentially invisible.”

Opponents of the so-called millionaires tax that would add a 4 percentage point tax on any income over $1 million (on top of the 5% flat tax the state already changes) wasted no time in saying Raytheon’s decision may have been in part due to the push for that tax.

“It won’t be the last headline that we read in that regard,” said Eileen McAnneny, president of the Massachusetts Taxpayers Foundation, after the host of a forum on the state budget read a breaking news alert about the company’s plans. Companies are “much more attuned to relative cost differences,” she said.

The Massachusetts Fiscal Alliance also warned to lawmakers, who hope voters approve the income surtax amendment ballot question this November, that Raytheon’s move “could be the first significant canary in the coal mine for Massachusetts”

“Raytheon may have considered this move for many reasons, but it’s not lost on us that when the legislature’s income tax ballot question is months away from appearing on the ballot, a large Massachusetts based company like Raytheon decides to move its corporate headquarters out of Massachusetts,” said Paul Diego Craney, spokesperson for Massachusetts Fiscal Alliance.

Raytheon is known today largely for its aerospace and defense divisions, but among its first breakthroughs was something that became ubiquitous in America’s kitchens: the microwave oven, an invention of Raytheon’s Percy Spencer.

In March this year, the company launched RTX Ventures, its own corporate venture capital group. The firm made a single public investment since then, in Atlanta-based Hermeus Corp., a company developing hypersonic aircraft.