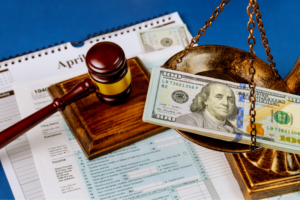 JULY 28, 2022…..With just three days left to hold formal sessions this year, Beacon Hill Democrats may have to take their long-discussed $1 billion tax reform and relief plan back to the drawing board now that it appears that a 1980s law largely relegated to the depths of Beacon Hill memories will be triggered by the fiscal year 2022 surplus, resulting in nearly $3 billion being returned to taxpayers.

With a historic surplus expected from the budget year that ended June 30, Democrats in the Legislature have been pursuing about $500 million in permanent annual tax breaks and credits and another $500 million in one-time, $250 payments to middle-income earners. But the idea that a 1986 voter law that set a cap on state tax revenue growth and requires the overage to be returned to the approximately 3.8 million individuals who paid income taxes last year could be triggered for just the second time ever has the governor feeling confident that Bay Staters will ultimately get even more relief.

“Based on the performance of our economy and our tax collections for the last fiscal year, we do believe there’ll be a significant return to the taxpayers, according to existing state law, sometime later this year,” Gov. Charlie Baker said Thursday morning. He added, “We think the number’s probably north of $2.5 billion that would be in tax rebates to the people in Massachusetts.”

Later Thursday, Baker’s budget office said its estimate is that $2.965 billion will be slated to be returned to the taxpayers under the law known as Chapter 62F. If that figure holds, it would result in taxpayers getting back about 7 percent of the income taxes they paid in 2021, the Executive Office of Administration and Finance said. A person with $75,000 of taxable income could expect a return of about $250, officials said.

Under terms of the tax cap referendum sponsored by the Citizens for Limited Taxation and approved with 54 percent support from voters in 1986, if revenues grow by more than the growth in wages and salaries, the excess money must be returned to taxpayers. Once the auditor determines that the state did collect tax revenue above and beyond the cap, the Department of Revenue “shall take all the necessary action to effectuate a tax credit equal to the total amount of such excess,” the auditor’s office said.

The final determination of how much state tax revenue should be returned is due from Auditor Suzanne Bump’s office by Sept. 20. Bump’s office said Thursday that the data required for the report is not yet available.

CommonWealth Magazine was first to report on the possibility that the excess revenue cap would be triggered.

CLT, which pushed for the 1986 law with the Massachusetts High Technology Council, said Thursday that the idea that the excess revenue relief could be triggered for the first time in 35 years was “exhilarating.”

“I’m sure Barbara Anderson is up there looking down on us with a grin pumping her fist in the heavens,” Chip Ford, Executive Director of CLT, said Thursday, referring to the late CLT leader who was one of the authors of Proposition 2 1/2 and a steadfast opponent of tax-raising efforts within the Massachusetts Legislature.

The Mass. Fiscal Alliance also praised Anderson and CLT on Thursday, saying their legacies “are so strong that they are still providing protections to Massachusetts taxpayers four decades on.”

“Everything’s on the Table”

The potential appeared to catch legislative Democrats off guard, as the possible windfall for taxpayers was not a topic of public discussion throughout the long budget cycle and while surplus revenues were piling up. None of the current members of the Legislature were in office in 1986. The House dean, Rep. Kevin Honan, was elected in 1986 and took office in 1987, and the Senate dean, Sen. Marc Pacheco, was first elected in 1988.

Ways and Means Chairmen Sen. Michael Rodrigues and Rep. Aaron Michlewitz told reporters Thursday afternoon that they are still trying to discern what the new-found relief might mean for their own tax relief plans, which are hung up in negotiations over a massive economic development bill that must be completed by the end of the weekend.

“I definitely think it puts everything back on the table for conversation on exactly what we can afford or can’t afford going forward. And again, to [Rodrigues’] point of saying that when we did this package, we did this not expecting, necessarily, the trigger would take effect. We didn’t have the revenue numbers, we did not know what the wage growth calculations would work out to be,” Michlewitz said of the tax relief package House and Senate leaders announced on July 7. “So I don’t think we had this potential number in play when we were making those decisions. So obviously, everything has to be still put back on the table for conversation. … We have to reevaluate exactly what we can afford going forward.”

The Ways and Means chairmen did not rule out the Legislature making changes to the 1986 law to take the automatically-triggered relief off the table.

“We haven’t gotten to that point to make any decisions yet,” Rodrigues said when asked if changes to 62F were under consideration. “Remember, the administration just discovered and informed us about this literally days ago. And we had to understand, we’re still trying to understand, and working with some outside folks that know the tax codes even better … How did COVID affect this? The fact that, you know, we know that billions of dollars came into the commonwealth with COVID relief dollars, with supplemental unemployment insurance payments and the like. How did that weigh into the fact there was no COVID pandemic back in 1986 when this statute was put on the books?”

Michlewitz added, “Everything’s on the table in this conversation right now. You know, in the last couple of days here.”

Though there are always competing interests when the state has unappropriated money on its hands, Baker said the state’s financial positions means that the excess revenue tax relief and the Legislature’s roughly $1 billion package of tax reform and direct payments can both happen.

“The tax breaks that are currently pending before the Legislature are eminently affordable within the context of the rest of this. I mean, you’re talking about a tax year this past year in which tax revenue went up by over 20 percent, which came on the heels of a tax revenue increase in the previous year that went up by 15 percent,” the governor said. “I mean, these are sort of unprecedented increases in tax revenue, which is in some ways exactly what this thing was designed [to do], to ensure that people in Massachusetts participated in that windfall.”

A Baker administration official argued Thursday that the Legislature’s plan for targeted tax relief to a specific band of taxpayers and the idea of returning one-time money that the state essentially overcollected are two different concepts and that one should not preclude the other.

Baker also pointed to the fiscal year 2023 budget he signed Thursday morning, which includes a major spending increase that he said “is absolutely affordable.” He said the state has “a lot of room there” and that he believes there will still be enough leftover to make additional investments in the MBTA and other things in the final close-out budget bill for fiscal year 2022.

Through the middle of June, the final month of fiscal 2022, Massachusetts had collected $39.199 billion in tax revenue for fiscal year 2022, enough that the Massachusetts Taxpayers Foundation estimated a surplus in the neighborhood of $3.5 billion. DOR has not yet reported final fiscal year-end revenue figures, or figures covering the full month of June, generally the second-largest month for receipts. An administration official said Thursday that June will be a big over-benchmark month.

But Baker’s budget office said Thursday that the state was $3.5 billion over revenue benchmarks through June with $2.1 billion still available after statutory transfers of excess capital gains. On top of that, the administration said, is $3.1 billion in “tax upside” or additional over-benchmark collections realized between January and May. Subtracting $3 billion for excess revenue credits or rebates would leave $2.7 billion available, the administration said.

After accounting for roughly $1.5 billion of state spending expected to be included in the pending economic development bill and some other spending, an administration official estimated that between $400 million and $500 million could be left for the final supplemental budget.

How It Would Work

The law states that the auditor’s determination that the state took in revenue in excess of the cap “shall result in a credit equal to the total amount of such excess” and that the credit “shall be applied to the then current personal income tax liability of all taxpayers on a proportional basis to the personal income tax liability incurred by all taxpayers in the immediately preceding taxable year.”

But the law has only ever been triggered in 1987, when collections exceed the cap by $29.22 million and taxpayers claimed almost $17 million of it, and budget chief Michael Heffernan said his team is working to clarify exactly how the credits — or possibly rebates, as Baker repeatedly referred to them — would work.

“We’re looking at what’s the quickest and most efficient way to get that money back to the taxpayers,” the secretary of administration and finance said.

That’s a point that Michlewitz would also like some clarity around.

“You even just said there’s no credit [or] rebate. I don’t think we have that full answer of what that actually is,” he said after a reporter asked about rebates or credits under 62F. “I think the administration has given a little mixed message on that conversation as well. So, getting a full vetting and a full understanding of that is going to be critical for us to really know whether or not we need to move forward with any conversations related to 62F.”

The only time the excess revenue cap was hit, in fiscal 1987, the $29.22 million in credits was made available to taxpayers through the addition of a line on the 1987 Massachusetts individual income tax return “upon which each individual taxpayer could insert their individually calculated share of the $29,221,675 credit,” the auditor’s office said.