Voters have repeatedly said no to raising taxes on the highest earners. This time might be different.

A heated ballot campaign to raise taxes on the wealthy overshadows a ho-hum gubernatorial race. Opponents blast TV airwaves with an ad featuring a fisherman who worries new taxes will hurt small business owners. Proponents of the union-backed initiative tamp down fears with an ad of their own: “Of course some people’s taxes will go up a little, but they can afford it.”

The year was 1994, the last time voters faced a ballot question to change how income taxes are collected in Massachusetts. They resoundingly rejected the measure.

Now some of the same players on both sides are at it again ― from the Massachusetts Teachers Association, on one side, to the Massachusetts High Technology Council, on the other ― locked in a battle over the economic soul of the Commonwealth. Question 1 on the November ballot is billed as an effort to raise more money for education and transportation by increasing taxes on households with an annual income greater than $1 million.

This is the sixth attempt to persuade voters to undo the state’s flat income tax rate. Each previous time — 1962, 1968, 1972, 1976, and 1994 — proponents lost in a landslide. While some of the dynamics of the failed 1994 campaign exist today, there are critical differences that would suggest the sixth time might prove to be the charm for proponents.

“We were out-staffed. We were out-advertised. It was a tough situation,” recalled Peter Enrich, an emeritus professor of tax law at Northeastern University who was involved in the 1994 effort and serves as an adviser to today’s Question 1 proponents.

This go-round, backers of the tax measure have raised about $24.8 million, almost exclusively from education unions, while the opposition — bankrolled by the business community and wealthy individuals — has $13.7 million, according to state campaign finance filings.

It also doesn’t take a political genius to seize on a fatal flaw of the 1994 campaign: asking voters to support a two-part ballot initiative on an issue as complicated and controversial as taxes. Question 6 would have amended the state Constitution to adopt graduated rates, while Question 7 would have set new personal income tax rates.

Proponents figured they had a strong case to justify such an elaborate strategy: The measure would represent a tax cut for 92 percent of taxpayers. Early polls showed support for the “grad tax,” but the more voters heard about it, the more confused they became. The last poll, released days before the November 1994 election, showed the initiative was on track to lose.

“One of the general lessons that I think people have learned about ballot questions over the years is that complexity is a real hurdle,” Enrich said. “Given what general attitudes were in the ‘90s, we were trying to do too much.”

Today, voters only have to answer a single question about a constitutional amendment, and it’s been distilled to a simple concept: increase taxes on people who make more than $1 million a year. This would affect roughly 26,000 households — or less than 1 percent of taxpayers ― by adding a 4 percent surcharge to income over $1 million.

Jim Braude, who led the alliance that supported the 1994 graduated tax, hails the strategy as “smart.” In particular, Question 1 links higher taxes to funding education and transportation improvements. The 1994 proposal, however, was not intended to raise revenue. As a result, it felt more like an exercise in redistributing wealth by increasing taxes on the top 8 percent of households. 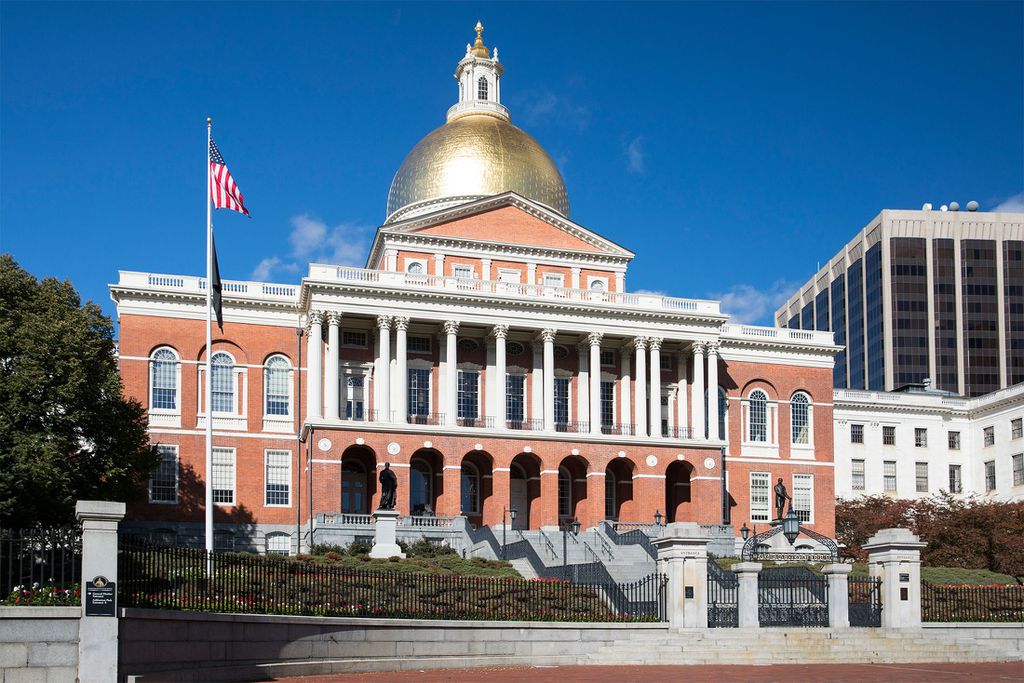 Massachusetts State House the seat of Government, with golden dome and patriotic Stars and Strips flag in the city of Boston, United States. TIM GRAHAM/PHOTOGRAPHER: TIM GRAHAM/GETTY I

“You’re not endorsing an abstract concept. You’re endorsing something very concrete,” said Braude, who is now a popular radio and TV host on WGBH. “The question itself is constructed in a way that is far more appealing and far less scary to voters than anything that’s been done before, including my effort in ‘94. They really did it brilliantly.”

The organizers of Question 1 are also benefiting from a propitious moment in Massachusetts politics: The anti-tax movement lacks high-profile champions.

In 1994, they had two: Barbara Anderson and Bill Weld.

Anderson, the sharp-tongued head of Citizens for Limited Taxation, was in her element. She had led a series of successful ballot questions that reduced taxes, most notably Proposition 2½ in 1980, which capped property tax increases at 2.5 percent of a community’s total valuation.

By many accounts, Anderson was the state’s most powerful unelected official. Allies dubbed her a “tax-cut tigress,” while foes labeled her a “tax-cut terrorist.” And when it came to defeating the graduated income tax, she took a no-prisoners approach by tapping into a mistrust of government and portraying the initiative as a scheme by liberals and public employee unions to eventually raise taxes on everyone.

This time, the opposition doesn’t have Anderson to denounce new taxes at every turn. She died from leukemia in 2016 at age 73.

Anderson’s distaste for taxes was perhaps matched only by Weld’s. At the time, he was running for a second term as governor and cutting taxes was a cornerstone of his campaign. The Republican was a staunch opponent of the graduated tax and railed against it with a memorable one-liner, calling the measure a “Trojan horse.”

“I majored in classics and I think I know a Trojan horse when I see one,” Weld told the Globe, adding that the proposal was “designed to secure the admission of the grad tax within the gate.”

In November 1994, Weld garnered a whopping 71 percent of the vote; his victory margin was similar to the losing margin for the grad tax, with a lopsided 69.6 percent of voters against. By being on the ballot, Weld brought out like-minded constituents and got out the no vote.

Weld, who went on to run for president and is now a lawyer at Mintz Levin, remains fiercely opposed to a graduated tax. He will vote no on Question 1.

“I’m one of those who thinks that once people get the taste of tax increases in their mouths they’re going to want more,” Weld said, “and that’s not fundamentally good policy.” 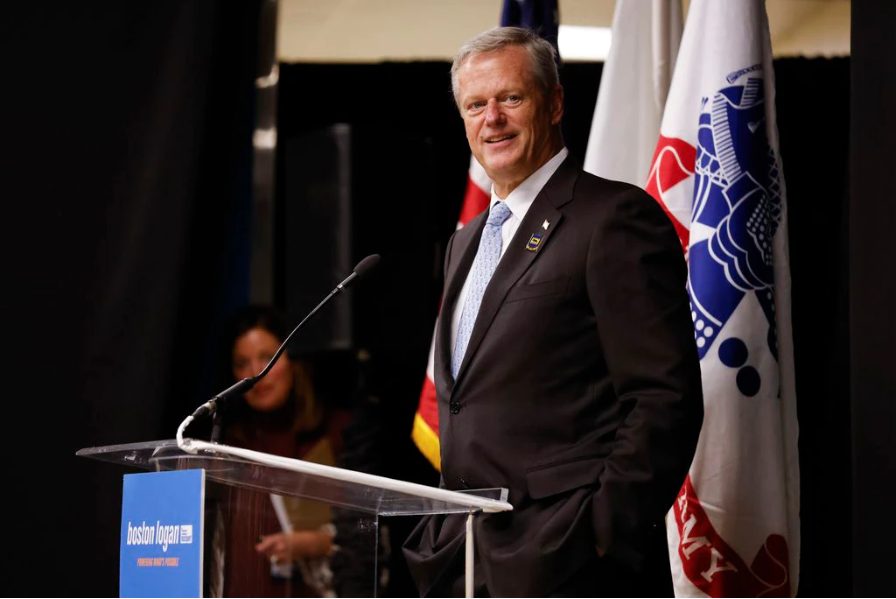 On Question 1, the closest Governor Charlie Baker has come to articulating a position is: “I don’t think we should be raising taxes.” CARLIN STIEHL FOR THE BOSTON GLOBE

Baker, a Weld protégé who served in his administration, is not running for a third term. That shouldn’t preclude him from taking a stand on the millionaires tax. Still, on Question 1, the closest this Republican governor has come to articulating a position is: “I don’t think we should be raising taxes.”

Meanwhile, Maura Healey, the Democratic attorney general who is running for governor and leading by a wide margin in the polls, has said she supports the surtax.

Question 1 opponents have urged Baker to be more vocal, if not vociferous, about the proposed surtax, so far to no avail.

That frustrates Chris Anderson, president of the Massachusetts High Technology Council, whose group fought to defeat the 1994 graduated tax and is working to derail Question 1.

“If I were governor, I’d be saying, ‘You’d be crazy to vote for this,’ ” Anderson said.

Anderson acknowledged that even some business leaders are reluctant to go public with their opposition to new taxes, out of fear it might hurt their corporate brand and make it difficult to recruit and retain employees who might support the surtax. For Baker, Anderson believes it’s a matter of the governor protecting his legacy.

“Don’t let this be the undoing of everything that you can identify as positive that happened,” Anderson said. “The most important thing that’s happened in the last eight years is that the state’s private economy has strengthened to the point where it’s one of the strongest in the United States of America, and there’s really no rationale to dismantle it.”

In a statement, Jim Conroy, a senior adviser to Baker, made clear that the governor does not like new taxes, especially at a time when the state coffers are awash in extra cash.

“With the Commonwealth having a multibillion-dollar budget surplus and billions in unspent federal aid, Governor Baker has been focused on delivering tax relief and does not support raising taxes on the people of Massachusetts, including through Question 1,” Conroy said.

The polls indicate Question 1 is on track to win by a modest margin. Neither side predicts a blowout. But one thing is obvious: Organizers of the 1994 campaign have learned from their mistakes. This time, victory might finally be within their reach.

Jeremiah Manion of the Globe staff contributed to this report.

Shirley Leung is a business columnist. She can be reached at shirley.leung@globe.com.