The Massachusetts High Technology Council is celebrating 45 years of fostering innovation, economic prosperity, and job creation in the Commonwealth on Tuesday, May 24 at its 2022 Annual Meeting.

As the region’s premier gathering for leaders from business, government, and academia, the Massachusetts High Technology Council’s Annual Meeting offers invaluable perspectives on current priorities and emerging issues that will drive the health and robust growth of Massachusetts’ innovation economy now and in the future.

Join us for a return to in-person events with a luncheon and program at the Seaport Hotel featuring:

A look at the Council’s latest initiative, MassVision2050—a groundbreaking, multi-year collaboration to generate bold ideas to prepare Massachusetts for the opportunities and challenges of tomorrow 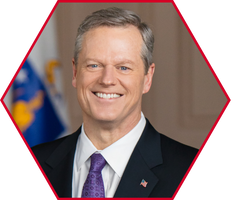 The Commonwealth of Massachusetts

Governor Charlie Baker was sworn in for a second term as the 72nd Governor of the Commonwealth of Massachusetts on January 3, 2019, after a first term focused on moving Massachusetts forward through bipartisan, results-driven leadership.

Ensuring Massachusetts continues to be a national leader in education, Governor Baker has made historic investments in K-12 education, increased support for vocational and technical schools, and expanded early college opportunities for high school students.

Governor Baker has put Massachusetts at the forefront of fighting the opioid and heroin epidemic, doubling spending on prevention, education, treatment, and recovery and signing two major bills that have served as models for other states.

Confronted with the challenges of rising energy costs and a changing climate, Governor Baker has taken nation-leading steps to diversify the Commonwealth’s energy portfolio, safeguard residents, municipalities and businesses from the impacts of climate change, and secure progress toward greenhouse gas reduction targets.

Governor Baker has spearheaded long overdue reforms at the MBTA that have led to significant improvements to operations and finances, and put the T on track to spend more than $8 billion on infrastructure over the next five years to improve riders’ experience.

Prior to his election, Governor Baker was a highly successful leader of complex business and government organizations, serving as a cabinet secretary to both Governor William Weld and Paul Cellucci, and leading Harvard Pilgrim Health Care, as CEO, from the brink of bankruptcy to one of the nation’s highest ranked health care providers.

Raised in Needham, Governor Baker and his wife Lauren reside in Swampscott, and are the proud parents of their three children, Charlie, AJ, and Caroline.

Neil Thompson is a Research Scientist at MIT’s Computer Science and Artificial Intelligence Lab and a Visiting Professor at the Lab for Innovation Science at Harvard.

Neil is also an Associate Member of the Broad Institute, and was previously an Assistant Professor of Innovation and Strategy at the MIT Sloan School of Management, where he co-directed the Experimental Innovation Lab (X-Lab). He has advised businesses and government on the future of Moore’s Law and have been on National Academies panels on transformational technologies and scientific reliability.

Neil did his PhD in Business and Public Policy at Berkeley, where he also did Masters degrees in Computer Science and Statistics. He has a masters in Economics from the London School of Economics, and undergraduate degrees in Physics and International Development. Prior to academia, Neil worked at organizations such as Lawrence Livermore National Laboratories, Bain and Company, The United Nations, the World Bank, and the Canadian Parliament. 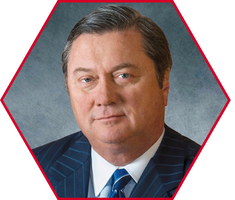 Mr. Reynolds is President and Chief Executive Officer of Putnam Investments and leads Putnam’s Operating Committee. In addition, he is President of The Putnam Funds. Building upon a distinguished 30-year career, Mr. Reynolds has revitalized Putnam through strong, sustained investment performance, new products designed for today’s market challenges, and thought leadership on the future of retirement and workplace savings. Respected as an industry statesman, Mr. Reynolds is regarded as a driving force of innovation and progress in institutional and retail financial services.

In addition to his Putnam responsibilities, Mr. Reynolds is Chair of Great-West Lifeco U.S., one of the nation’s top providers of retirement savings products and services, life insurance, annuities, and executive benefits products. Prior to joining Putnam in 2008, he was Vice Chairman and Chief Operating Officer of Fidelity Investments. Mr. Reynolds’ accomplishments have earned multiple industry honors over time. He was named Fund Leader of the Year at the Mutual Fund Industry Awards in 2010 for the strategic improvements he initiated at Putnam. The following year, under the leadership of Mr. Reynolds, Putnam was honored as Retirement Leader of the Year for initiatives and innovative solutions in the workplace savings arena. Mr. Reynolds has also received a Lifetime Achievement Award from PLANSPONSOR magazine for popularizing employer-sponsored 401(k) plans.

Christopher R. Anderson is president of the Massachusetts High Technology Council, Inc. Before becoming president in January 2001, he served as vice president and general counsel for the Council. He joined the Council in 1984 and is responsible to the Board of Directors for the successful development and implementation of public policy programs and initiatives in Massachusetts and in Washington, D.C. that help make Massachusetts the world’s most attractive place to create, operate, and expand technology businesses.

Mr. Anderson is directly involved in resolving conflicts and advocating positions on a broad range of state and federal public policy, legislative and regulatory issues. Those issues include tax and fiscal policy, energy, education, workforce training, environment, and health care. In January 2006, Mr. Anderson was appointed to serve as a member of the state Board of Education (BOE), the nine-member panel that oversees state K-12 education policy. From November 2006 through August 2007, he served as Chairman of the BOE, an appointment designated by former Massachusetts Governor Mitt Romney.

In December 2003, he became president of the Massachusetts Defense Technology Initiative, a public-private partnership that led the Commonwealth’s successful efforts to preserve Hanscom Air Force Base and Natick Soldier Systems Center through the U.S. Defense Department’s 2005 Base Closing process. In January 2009, Mr. Anderson was named to the Hanscom Air Force Base Honorary Commander program, which is designed to create deeper ties between the Air Force and the New England region and to increase public understanding of the Hanscom AFB and Air Force missions. The honorary commander program pairs community leaders with center and wing leaders to forge relationships and uses creative, unique activities to immerse honorary commanders into the wings; Mr. Anderson will serve as the honorary commander for Hanscom’s 653rd Electronic Systems Wing until 2011.

Mr. Anderson graduated from Lexington High School in Lexington, MA. He holds a bachelor of arts degree from the University of Notre Dame, and a law degree from Suffolk University School of Law. 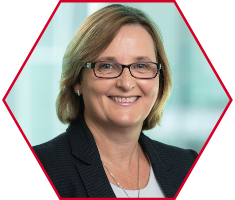 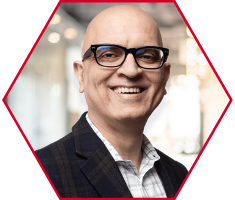 Nav serves as the managing partner of our Boston office and leads the state and local work for our Public Sector Practice in North America. He is also a leader in our Life Sciences and Strategy & Corporate Finance Practices, with a focus on innovation. Nav brings deep business expertise in strategy, innovation, operations, business development, and risk to all his client engagements. An expert in the use of Six Sigma methodologies for product development and process design, Nav holds 15 patents.

He works with pharmaceutical companies to enhance R&D productivity, with contract-research organizations to strengthen performance, and with private-equity players that invest in a variety of science- and medicine-intensive areas. He also works with public-sector organizations to refine strategy and operations.

Nav spearheads McKinsey’s knowledge initiatives on R&D productivity in the pharmaceutical industry and leads our Center for Asset Optimization. His recent government work has included helping regulators, states, and cities enhance their performance across the board. He has served as the Chair of the Board for the Greater Boston Chamber of Commerce, and the Chair of the External Advisory Board of University of Minnesota, Department of Chemical Engineering and Materials Science. He also hosts Imagine Get-Togethers that convene cross-sector leaders on cutting-edge topics, such as synthetic biology, commercial applications of drones, the future of space exploration, and the impact of aging.

Before joining McKinsey, in 2001, Nav was a laboratory manager at General Electric, where he helped to design manufacturing processes and to develop new polymetric materials and nanomaterials.

Ray Stata, founder of Analog Devices and co-founder and first president of the Massachusetts High Technology Council, served continuously as a member of the Council’s board of directors for 40 years until his retirement in 2017. He served in various Council leadership positions and earned a global reputation as a dedicated and successful industry leader and ardent advocate for cultivating talent and investments in research and innovation. His many academic and philanthropic engagements reflect these qualities.

In recognition of the 40th Anniversary of the Massachusetts High Technology Council in 2017, Council directors initiated the “Ray Stata Leadership and Innovation Award,” to be awarded from time to time to a leader currently active in Massachusetts who exhibits: 1) the key leadership qualities possessed and demonstrated by Ray Stata; and 2) the commitment to the core beliefs and fundamental values of the Council. The ideal candidate will model as close as possible Ray’s example. Ray Stata represents a leader of superlative talents and grace. This year’s recipient will receive the award during the 2022 Annual Meeting.

Since July 2012, Rafael Reif has served as the 17th president of the Massachusetts Institute of Technology (MIT), where he leads MIT’s pioneering efforts to help redefine the future of higher education. A champion for both fundamental science and MIT’s signature style of interdisciplinary, problem-centered research, Dr. Reif is driving initiatives to accelerate high-impact solutions to the urgent challenges of climate change and pursuing an aggressive agenda to encourage innovation and entrepreneurship.

In education, Dr. Reif’s central focus has been the development of online learning. The findings of his Institute-wide Task Force on the Future of MIT Education spurred rapid adoption of blended learning models in MIT classrooms, inspired the creation of new forms of credentialing such as the MicroMasters, expanded educational access for learners around the globe, and equipped MIT to respond to COVID-19 with a quick pivot to remote learning.

In May 2021, he and his leadership team mobilized MIT’s strengths to address the climate crisis through “Fast Forward: MIT’s Climate Action Plan for the Decade.” Distinctive elements include MIT’s Climate Grand Challenges, an ambitious initiative to accelerate breakthrough ideas for tackling and adapting to the impacts of global warming, and the MIT Climate and Sustainability Consortium, which unites leading companies in piloting and adopting climate solutions at scale and across industries.

Dr. Reif has made it a priority to equip the next generation of innovators with the tools to drive their ideas to impact. In October 2016, MIT launched The Engine, a venture firm specially geared to help new ventures turn “tough technologies” into innovations that address humanity’s great challenges. Dr. Reif has led a suite of further activities to make MIT the most stimulating and supportive academic environment in the world for innovation, including extensive campus makerspaces, a new minor in Entrepreneurship and Innovation, and the recently announced MIT Morningside Academy of Design. Under his leadership, MIT has also spearheaded the decade-long transformation of Kendall Square into a central force in Greater Boston’s biotech and innovation economy.

In October 2018, in response to the ubiquity of computing and the rise of AI across disciplines, he announced the MIT Stephen A. Schwarzman College of Computing, the most significant reshaping of MIT since the 1950s. He also led the creation of MIT.nano, a world class facility for nanoscience and engineering research; these toolsets are central to the national strategy for reasserting US leadership in semiconductors and micro- and nanoelectronics.

A member of the MIT faculty since 1980 and the inventor or co-inventor on 13 patents, Dr. Reif has served as director of MIT’s Microsystems Technology Laboratories, as head of the Department of Electrical Engineering and Computer Science (EECS), and as provost. He serves each year as an advisor to first-year undergraduates.

A Special Thank You to Our Sponsors!

Countdown to the 2022 Annual Meeting