A bill that would designate app-based drivers as independent contractors, while creating a small benefits program for drivers, is spurring debate among lawmakers, academics and the drivers themselves in Massachusetts, a key battleground in the fight over different business models for the gig economy. 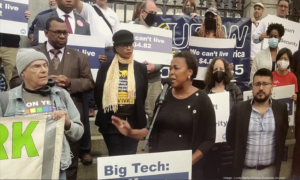 Rep. Nika C. Elugardo voices her opposition to H.1234, “An Act establishing portable benefit accounts for app-based drivers,” which would designate app-based workers as contractors, at a rally on the steps of the State House on Wednesday, Oct. 6, 2021. LUCIA MAFFEI/BOSTON BUSINESS JOURNAL

Democratic Reps. Mark Cusack of Braintree and Carlos Gonzalez of Springfield filed H.1234 earlier this year and testified in support of it during a legislative hearing last week. The bill takes a stand in the debate by designating drivers for companies such as Uber Technologies Inc. (NYSE: UBER) and Lyft Inc. (Nasdaq; LYFT) as independent contractors, not employees — a status that some drivers are fighting to obtain. Under state law, being labeled an employee means being entitled to benefits such as a minimum wage, overtime pay and earned sick time.

The bill would also require businesses such as the big ride-haling companies to create “portable benefit accounts” for those workers. Companies would contribute an amount equal to 4% of an eligible driver’s quarterly earnings, which drivers could then use to pay for health insurance or towards their retirement account, as State House News Service reported.

The rights of so-called gig workers have been at the center of a battle that puts Massachusetts on the front lines for the next months, as a question designating app-based workers as contractors is likely to land on the 2022 ballot.

Who’s against the bill

Attorney General Maura Healey was the first to testify in a five-hour virtual hearing last week that gathered dozens of supporters and opponents to H.1234 in front of the Financial Services Committee on Beacon Hill.

Healey, who last year sued Uber and Lyft arguing that their drivers are employees under state law, said that the bill would make app-based drivers “second class workers” by carving them out from all the ordinary protections provided to employees.

“I know that drivers need flexibility to earn income on their own schedule,” she said. “But as the chief law enforcement officer and the primary enforcer of state wage and hour laws, I’m here to say that under the law, drivers can have that flexibility and the rights and benefits of employment status, too.”

Healey said that it is hard to predict when the federal district court will act on her lawsuit. “It could come in months, it could come within the year,” she said.

Shannon Liss-Riordan, a labor attorney for Lichten & Liss-Riordan P.C., told the committee that Massachusetts law shouldn’t be allowed to be weakened, and that passing this bill would take a step in that direction.

Rep. Nika Elugardo, a Boston Democrat, and Sen. Paul Feeney, a Foxborough Democrat, joined opponents gathering on the steps of the State House for a rally on the day of the hearing. Freeney organized a bipartisan letter in opposition to the bill that was signed by 26 senators.

In separate statements, Boston mayoral candidates Annissa Essaibi George and Michelle Wu, both Democrats, also cited the need for an economy that prioritizes and protects workers, and the need for a government that works better for small businesses, workers and taxpayers, not tech companies.

The statements were provided by the Coalition to Protect Workers’ Rights, which launched to oppose what it described as a multimillion-dollar campaign in Massachusetts by big technology companies to “undermine civil rights, wages, and benefits of Mass. workers.”

Drivers who spoke against the bill at the rally, like Melody Cunningham, a mother of five, said that the ride-haling companies can afford to pay drivers a living wage and benefits like unemployment, which drivers don’t have right now.

“We have nothing. We have absolutely nothing,” Cunningham said.

Christopher Anderson, president of the Massachusetts High Technology Council, an organization of tens of tech firms primarily based in Massachusetts, testified in support of the bill.

“The gig economy is an important new part of a permanent wave that work will be done across the nation,” Anderson said. “This legislation is on its way to leading part of that evolution.”

The MHTC is a founding member of the Massachusetts Coalition for Independent Work, which launched earlier this year and is backed by several large national companies including Uber and Lyft, as well as local industry groups and nonprofits.

A spokesperson for the coalition sent via email a petition signed by over 3,200 drivers in support of H.1234. In a letter addressed to Rep. James Murphy, Sen. Brendan Crighton, a Lynn Democrat, and members of the committee, drivers said they deserve access to benefits and protections without sacrificing their flexibility.

At the hearing, many of the drivers who are in favor of the bill made it clear that they need flexible schedules to keep driving. Some also felt that the conditions under which they decide to work for Uber and Lyft should be up to them and them alone, as lawmakers supporting H.1234 are solving a problem that drivers don’t have.

Luis Ramos, a driver from Worcester, said that deciding when his working day is going to start and end is the best part of his job. He also criticized a recent study from the University of California-Berkeley, which estimated that workers driving 15 hours per week could legally earn the equivalent of $4.82 per hour. “I would never, ever, do this job, if I made $4.82,” he said.

Matthew Rose, who said he’s been a full-time gig worker for six years, told the committee he noticed that none of the people speaking in opposition of the bill is a driver.

“This bill would make it easier for me,” he said. “I’ll actually be making more money if this bill passes, because now I’m going to have help paying for my health insurance that I pay out of pocket now. So this bill actually gives me more money to help cover my expenses. I really don’t know how much more I can say.”

Marcus Cole, a Boston resident, said he makes more money driving for Lyft than any other full-time job that he has ever worked.

“House Bill 1234 is a great start to addressing what drivers want and need,” he said.