The Massachusetts High Technology Council is likely to launch a court challenge to the ballot language for the so-called millionaires’ tax unless the ballot question says the tax would not necessarily increase spending on schools and transportation, it said in a letter this week. 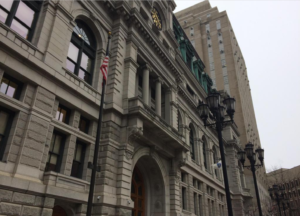 The Supreme Judicial Court could be in for another case involving the millionaires’ tax proposal, depending on the ballot language. GREG RYAN

The missive from MHTC raises the prospect of another clash before the Massachusetts Supreme Judicial Court, which struck down a previous version of the tax proposal in 2018. The proposal is now poised to go before voters as a ballot question in November 2022.

A court battle, should it come to pass, would be limited to the proposal’s language, not whether it should be on the ballot at all. Still, the MHTC’s letter drew strong rebukes from proponents of the tax on Wednesday.

In the letter, sent to Attorney General Maura Healey and Secretary of the Commonwealth William Galvin on Tuesday, the MHTC took issue with the ballot language that was to be used to describe the proposed tax in 2018. No such materials have been made public so far this year.

Back then, a summary of the proposal informed voters that revenue from the tax, subject to appropriation by lawmakers, would be used only for education- and transportation-related purposes. A description of the meaning of a “yes” vote used similar language.

The MHTC contended in the letter that the proposal does not require lawmakers to use millionaires-tax revenue to increase spending in those two areas, since they can reduce spending on education and transportation from other revenue sources, and replace it with revenue raised by the millionaires’ tax. Opponents to the tax have made the argument for years, as a reason not to pass the proposal.

The business group is asking Healey and Galvin to make sure that in 2022, the ballot language makes that point clear to voters. If not, “our clients are likely to challenge the summary and ‘yes’ statement before the Supreme Judicial Court,” wrote Goodwin partner Kevin Martin on behalf of the MHTC.

The letter asks Healey and Galvin to release the proposal language as soon as possible, or at the latest by Jan. 12, so that the MHTC has enough time to challenge the language, if necessary, under guidelines previously issued by the SJC.

Debra O’Malley, a spokesperson for Galvin, told the Business Journal that the attorney’s general office writes the summaries of ballot questions. The “yes” and “no” statements are required to be written jointly by the offices of the attorney general and the secretary of the commonwealth by May, she said. Those statements can be challenged in court within 20 days of their publication, according to O’Malley.

A representative from Healey’s office declined comment, other than to confirm the office received the letter.

In statements, both state Sen. Jason Lewis, one of the sponsors of the proposal, and the Raise Up Massachusetts coalition, one of its biggest supporters, took issue with the MHTC’s characterization of the proposal.

“Unfortunately the Mass High Tech Council and other big-business groups continue to pursue every tactic that their lawyers can dream up in order to protect multi-millionaires in the commonwealth from paying their fair share of state income taxes,” Lewis said. “The ‘millionaires tax’ proposal is clear that all the new revenue raised must be used for investments in public education and transportation, both areas that lawmakers and the public overwhelmingly agree need additional resources.”

Proponents and opponents of the tax are ramping up public campaigns over the proposal. The Pioneer Institute released a report Wednesday saying that pass-through businesses, which are potentially subject to the tax, make up about 70% of the state’s for-profit business entities. The Massachusetts Budget and Policy Center, meanwhile, issued its own report holding that less than 3% of those receiving pass-through income from those entities would be subject to the tax.

In the letter, the MHTC cited polling it conducted finding that when told lawmakers need not increase spending on education and transportation because of the millionaires’ tax, 72% of respondents replied that the 2018 ballot language was misleading.